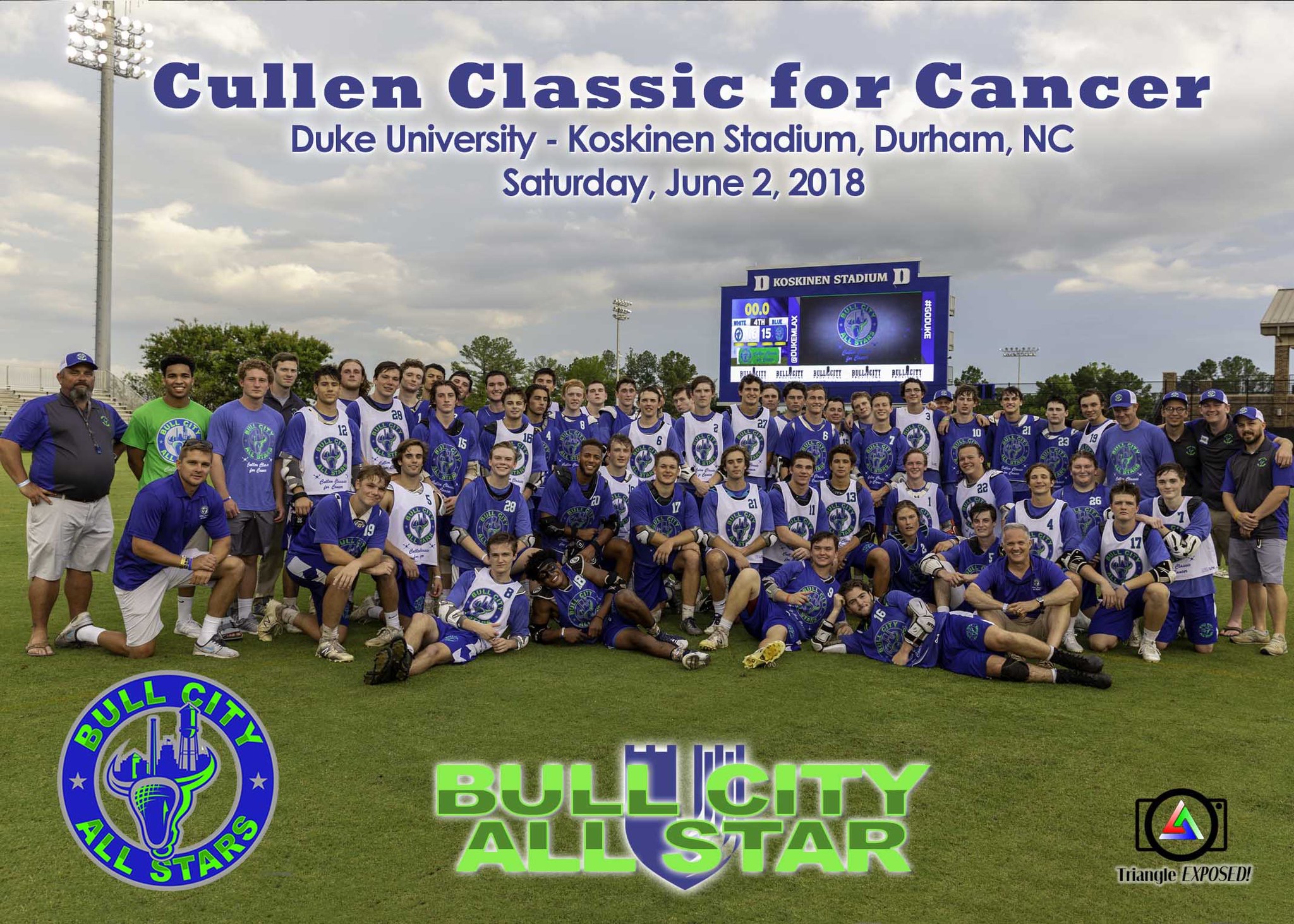 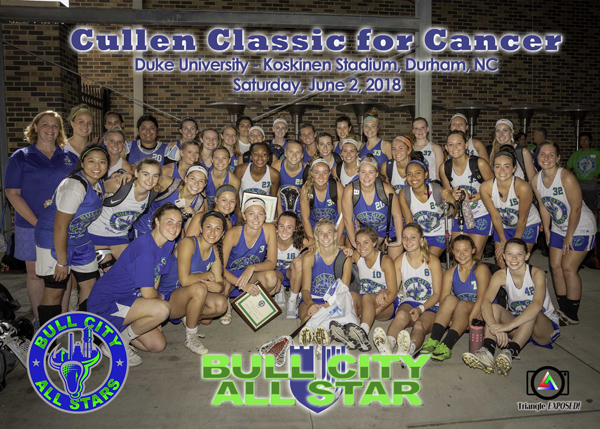 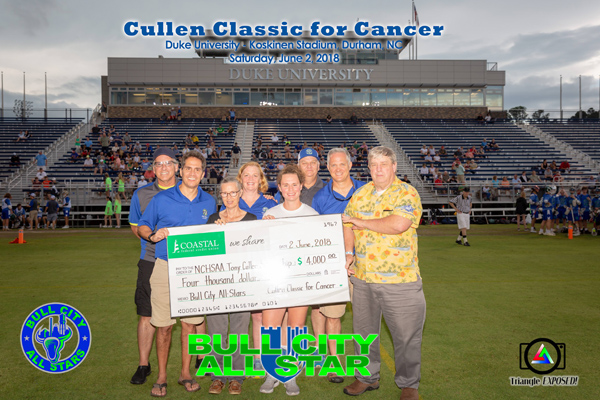 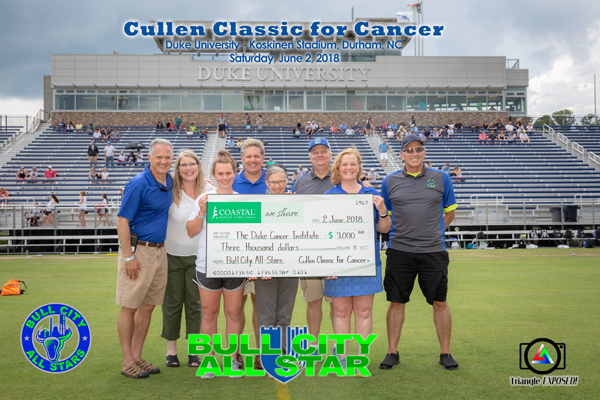 ​Organized by local high school coaches and Duke Lacrosse Alumni, the Bull City All-Star Games showcases the talents of the top male and female senior lacrosse players from across the state. The event not only provides recognition for these top players, but also serves as a dynamic way to honor the contributions Tony Cullen made to the sport of lacrosse: first as a player and a coach at Duke; then as an NCAA official. Tony impacted the trajectory of lacrosse in North Carolina for 25 years, before he lost his battle with cancer in 2002.

The 2018 games featured 101 of the top seniors from 68 different high school lacrosse programs. The two games played in Duke’s Koskinen Stadium attracted over 675 players, parents, fans and organizers; and raised over $7,000 for the Duke Cancer Institute and the NCHSAA Tony Cullen Memorial Scholarship Fund.

​In the first game of the day, the White team, coached by Cayla Veach (Page), jumped out to an early lead on a goal by Helen Forbes-Collier (Cardinal Gibbons). The Blue team, coached by Erin Redmond (Hoggard), struck back quickly when Izzie Akers (Leesville Road) fed McKenna Robertson (Hoggard) for a nice goal.  The teams then battled back and forth, trading the next 6 goals, and the score was tied 4-4 with 10 minutes to play in the first half. The Blue Team then exploded for six more goals, led by Robertson’s three goals in the half, and took a commanding 10-5 lead into intermission.

​The Blue Team came out hot again, scoring four more goals in the first six minutes of the 2nd half, and playing strong team defense.  With 18 minutes to play, and Blue leading 14-5, thunderstorms closed in on Koskinen and the women’s game was delayed for almost 1 hour.  Unfortunately, administrators were forced to call the game early, but the game still showcased the great talent, outstanding effort and excellent sportsmanship of the 45 all-star women who competed.

​After the skies cleared, the men took the field for another highly competitive game, which wasn’t decided until the final minute.  Tyler Carpenter (Durham Academy), a long stick midfielder, started things off quickly by stripping the ball from a Blue player, and scoring for White in the first 40 seconds.  Blue bounced back right away, and the spirited 1st quarter ended 5-3 Blue. White then went on a four goal run in the 2nd quarter and led 8-6 at halftime.

White widened their margin to three goals early in the 3rd quarter, but Brewer Warlick (Laney) responded with two goals and one assist  to help Blue tie the game 9-9. The teams traded two more goals and the game was knotted up 10-10 to start the 4th quarter. The final quarter was filled with lots of action and excitement, as the all-star teams combined for 11 more goals in an extremely tight game. Blue led most of the quarter, White surged ahead in the final 3 minutes led by attackmen Sean Goldsmith  (Northwest Guilford) and Jarod Halverson (Jordan). The game wasn’t fully decided until the last minute, as Team White held on to win 16-15. For the second year in a row, the men’s all-star game proved highly competitive and extremely captivating until the very end.

Leading scorer for the White Team was Sean Goldsmith ( Northwest Guilford,4 goals / 2 assists), while Brewer Warlick (Laney, 3 goals / 1 assist) led the Blue offense. Goldsmith, who will play at Mercer next year, was named the game’s Offensive MVP. Tyler Carpenter (Durham Academy, 1 goal / 2 assists), who will play at Duke, was named the Defensive MVP.

The Bull City All-Star Staff would like to thank all the coaches, players, parents, officials, sponsors, Duke Lacrosse Alumni and the Duke Athletic Staff, who made this years’ event even bigger and better.  The 2019 Bull City All Star Games are tentatively scheduled for Saturday, June 1 back in Koskinen Stadium. Anyone interested in becoming a sponsor should email the Co-Directors at bullcityallstarlax@gmail.com.